The all-natural evangelists get an E. coli reality check.

The executives at Chipotle Mexican Grill have been, well, dining out for years on their self-styled reputation for “food with integrity.” So their competitors who by implication lack integrity can be forgiven if they indulge in a little Schadenfreude about the company’s recent trouble with food-borne disease.

On Monday the Centers for Disease Control and Prevention said it is investigating another E. coli outbreak linked to the restaurant chain. Since July the burrito seller has been connected to five outbreaks spanning several states. At least 50 customers have munched on something laced with E. coli, and more than 120 in Boston came down with the gastrointestinal norovirus.

The company has closed and scrubbed scores of restaurants but says it still has no idea what’s poisoning people, and here’s a possible reason: About 10% of Chipotle’s produce—the most common disease culprit—is grown locally. Chipotle calls this local-sourcing part of its commitment to “the very best ingredients,” but working with so many suppliers makes it difficult to catch the offending tomato.

Founder Steve Ells vowed on a global groveling tour that Chipotle will ramp up safety measures at the company’s nearly 2,000 locations. The company will likely rely less on local suppliers, many of whom can’t comply with sophisticated testing. The company will also chop, prepare and hermetically seal ingredients such as cilantro and lettuce in a central kitchen before shipping it to local restaurants.

In other words, Mr. Ells promises to bring his restaurants into the 20th century. One reason large chains dice foodstuffs in a central kitchen is to avoid contamination. And while Chipotle derides “factory farming”—last year the company put out a comedy series about the “utterly unsustainable world of industrial agriculture”—such economies of scale exist to deliver safer food at a lower price.

As it happens, Chipotle’s locavore movement is a result of the wealth and prosperity unleashed by efficient agriculture. In 1950 food gobbled up more than a quarter of household spending. That figure has plummeted to single digits—leaving the economy with enough excess capital to finance people like Mr. Ells who want to create a company with a marketing model deriding efficient agriculture. The romantic longing for colonial-era farming has grown precisely as the share of people who actually plow fields has dwindled to 2% of society.

Also ironic is Chipotle’s campaign against genetically modified organisms, known as GMOs. Earlier this year the company celebrated “a farewell to GMOs,” not that anyone has ever fallen violently ill from eating a GMO. The company thus plays into public fears that crops with tweaked DNA are Frankenfood, but E. coli is all natural. Genetic modification makes agriculture more sustainable: Shoring up a crop’s defenses against insects or drought helps farmers cut back on pesticides and tillage.

Chipotle’s anti-GMO and locavore advertising has been part of a commercial strategy to differentiate from competitors and make a buck. Perhaps no longer: On Tuesday the stock tumbled below $500 for the first time since May 2014, with the price down about 25% for the year. Sales are expected to drop precipitously this quarter. The market is a brutal teacher when customers and investors realize a company isn’t practicing what it preaches.

We are members of the Shasta County Farm Bureau and they often share articles concerning agriculture that they find interesting.  This particular article was one they found in the Wall Street Journal.

Lassen Canyon Nursery, Inc. grows a wide variety of strawberry plants. We offer the Day Neutral strawberries, as well as the Short Day “June Bearing” varieties. To read about each kind of berry, visit our Strawberry Varieties page. Call us current availability. 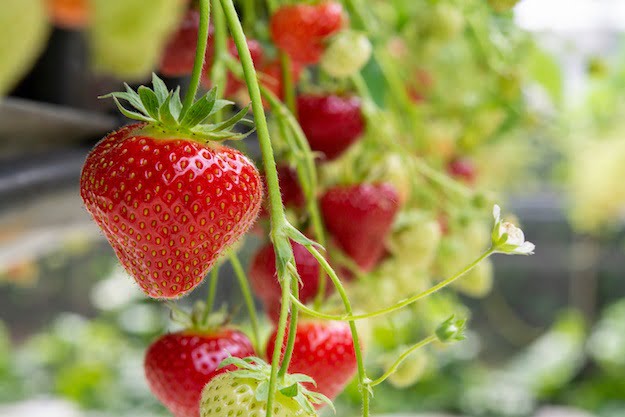